AirTrain from JFK to Manhattan – The simple instructions 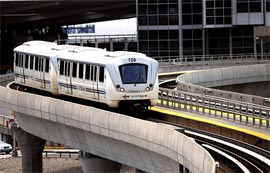 Starting in late 2003, getting from JFK Airport into Manhattan got a lot faster and cheaper, although not necessarily easier, especially for first-time visitors. The AirTrain will get you from your terminal at JFK to Penn Station in Manhattan in around 35 minutes for between $8.25 and $12.25 (depending on the time of your trip), which compares to $15 and an hour by bus, or a taxi for about $55, which also takes around an hour, although it could be more or less depending on traffic. You can have up to 4 people in the same taxi for the same price, so if you are traveling in a group of 3 or 4 then a taxi should be considered.

Simplest possible instructions on using the AirTrain to Manhattan

Walk outside your terminal at JFK, and you’ll see signs to stairs and elevators that will take you up to the AirTrain platform just ahead. JFK is huge, and the AirTrain circles around the inside loop between the terminals, and it’s actually free to ride between terminals or even out to the car rental pick-up or long-term parking areas.

AirTrains come every few minutes, so you won’t be waiting long. There are 3 different routes, so if you want to get to Penn Station quickly you’ll have to pay attention to which one is coming.

Get on the Jamaica-bound AirTrain, and ride it until the end of the line, which should be between 10 and 15 minutes, depending on where you got on. You don’t have to pay the $5 for the AirTrain until you get to Jamaica Station (or Howard Beach Station).

Transferring to the Long Island Railroad 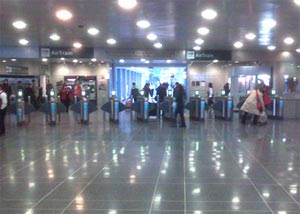 After you get off the AirTrain you’ll need to pay $5 to exit the AirTrain terminal, and you have 3 options in doing this:

There are attended ticket windows that can sell you tickets, but there are usually long lines at these if your AirTrain was crowded and you weren’t the first in line. There are also easy-to-use vending machines in the same area, where you can pay for any of the above options with a credit or ATM card. You’ll only have to pay once no matter which option you choose, so this is easier than it sounds.

Fares for the Long Island Railroad into Manhattan

Follow the crowd to the platforms where all the Manhattan-bound trains stop. All LIRR trains on this route stop in Jamaica, and all of them go on to Penn Station as their final stop. During rush hours you’ll have to wait no more than 8 minutes or so, and during other times it might be 10 minutes between trains. The ride to Penn Station takes about 15 minutes total. Welcome to Manhattan.