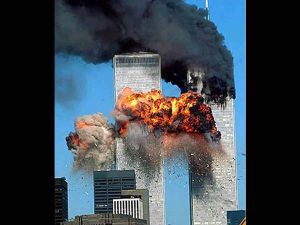 Almost from the moment two planes crashed into the World Trade Center in New York City, there were people convinced that the attack had not been carried out by Muslim extremists, but rather was a part of a conspiracy theory by the U.S. government. In fact, even the poet laureate of New Jersey Amiri Baraka mentioned the possibility of a conspiracy in a poem called “Somebody Blew up America.” Baracka wrote:

Who knew the World Trade Center was gonna get bombed/
Who told 4000 Israeli workers at the Twin Towers/To stay home that day/Why did (former Israeli Prime Minister Ariel) Sharon stay away?/Who know why Five Israelis was filming the explosion/And cracking they sides at the notion

The poem was enough to upset New Jersey Governor Jim McGreevey into to eliminating the poet laureate position, showing how controversial September 11 and the possible conspiracy theory is. (Those more interested in this topic can read the full story).

For those who have never heard of the conspiracy theory that the U.S. was involved in the 9/11 attacks, I’ll quickly break it down the basic idea. Basically, there are many people who cite photographic and eye-witness accounts to support the theory that it was not passenger airplanes that crashed in to the World Trade Center that day, but in fact military planes sent by the United States government. The conspiracy theorists also believe that explosives were used leading to the collapse of the towers and that the attack was staged as part of an effort to get Americans on board with the idea of a war in Iraq (despite the fact that no one ever claimed Iraq was responsible for the attacks, the invasion of Iraq and 9/11 are often closely linked). I have watched the popular documentary, “9/11: In Plane Site,” which shows evidence supporting how and why the attacks on the World Trade Center and the Pentagon on September 11, 2001 were not terrorist driven, but in fact part of a conspiracy by the U.S. government. The movie gives some pretty compelling evidence. But who do you believe? Sound far fetched, or like maybe it could be true? Whether you believe the conspiracy theory to be true or think it’s ridiculous, assuming anything to be total truth is dangerous and opening your mind to the possibility, examining both sides for yourself and making up your own mind is certainly a good idea.

If you are interested in watching “In Plane Site,” here is Part 1 of the documentary.

I went out and did some research trying to find out what sort of credibility these conspiracy theories actually had. Is it even fathomable that the September 11 attacks could have been part of some intricate government conspiracy in an effort to get the American people behind starting a war in Iraq? As my own father is an engineer, and I tend to put a lot of trust in these guys when it comes to knowing how things work mechanically. So, when I found a great article on the conspiracy theory in Popular Mechanics (my dad’s all time favorite magazine) called “Debunking the 9/11 Myths: Special Report,” I decided that the article would probably have good, solid facts. The source is very credible, and the article is well researched and balanced. This article explores the possibility of the conspiracy theory by studying the claims made by the conspiracy theorists in photo and video and closely examining the evidence.

If you are interested in this topic, I would highly recommend reading the article in full, but basically, the guys at Popular Mechanics broke down each argument along with the evidence cited by the conspiracy theorists and examined the credibility of the claims and sought expert opinions on the possibility of whether the widely accepted account that terrorist hijackers were responsible for the attack is in fact false. The consensus by Popular Mechanics? The conspiracy theory is a myth, and with their extensive research, solid evidence and photographic accompaniment, I may just believe them. But, it’s up to you to decide for yourself. If you want to check out our post on September 11 in 56 photos, you can study the photos and come to your own conclusion. What do you think really happened on September 11?