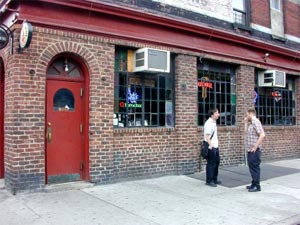 When I first moved to New York City in 1990, my friends and I were a bit scared to walk into Alphabet City, and you really couldn’t blame us because out-in-the-open drug deals were some of the least frightening things about the neighborhood. Of course, through the 90s things changed drastically. Now it’s not only safe, but rents are far out of most of our price ranges as well.

But even back then the one place that would motivate us to run the gauntlet was simply known as 7B, since it’s on the corner of 7th Street and Avenue B. The real name of the place is Vazac’s Horseshoe Bar, but no one calls it that. The city’s easy-to-use grid system is made just that much easier by names like 7B, where even the dumbest or drunkest person knows exactly where they are.

When I first started going to 7B the best piece of trivia about the place is that it’s where the famous scene from Crocodile Dundee was filmed where he is flirting with someone who turns out to be a transvestite. That’s a man?!?!? But the place has also been used through the years to shoot many TV commercials and other films, including something in the Tom Cruise movie Cocktail, which I remember not liking much.

But even today, 7B might be my favorite bar in the neighborhood. It’s unusually large for the area, but as long as you go before midnight or so it’s usually pretty easy to get a good spot in spite of the building crowds. They have about 25 beers on tap, with pitchers of domestics starting around $9 and imports at around $15. They’ve also got a full bar and cocktail prices are fairly reasonable for the city.

Their above-average sound system and large and eclectic selection on the jukebox have always been key factors in my appreciation of the place. Many bars in the neighborhood seem to go so far out of their way trying to create a cool vibe, that patrons end up listening to low-fi jazz recordings from the 1930s through their shitty speaker systems just so they can avoid playing something someone might consider popular in some way. The jukebox at 7B has lots of classic and popular stuff, and quite a few interesting chestnuts from the punk era that seem to get played a lot anyway.

Public transportation doesn’t get too close to this place, unless you’ve mastered the city’s bus system, which most locals don’t and very few tourists bother with. The closest subway stops are the L line at 14th Street and 1st Avenue, or the N and R lines at Broadway and Astor Place (which is what they call 8th Street in part of the Village).