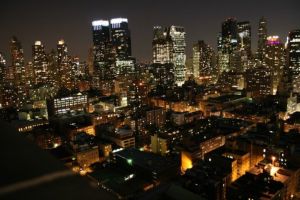 You can pretty much throw a poorly made paper airplane in New York City and hit a bar. On any given block, in any part of the city, there will be at least one drinking establishment where you can celebrate life with a fancy cocktail or wallow away your sorrows over a stiff drink. The plethora of bars may be convenient for alcoholics, but the overwhelming number of choices can make finding a great, fun and CHEAP place to kick back and have a few pretty difficult. Plus, with $12 cocktails seemingly being the norm in this city, it can also be tough to hunt down bars where you don’t have to spend an arm and a leg to get a buzz. So, I asked the expert of all experts on this subject, my childhood friend, number one travel partner and current New York City resident Miss Lindsey Brown to advise me on where the hottest places to drink are in the Big Apple. Here is her list:

Not only does Lindsey think this place is hot, so does New York Magazine, which rated this bar as a “Critic’s Pick.” But, who wouldn’t love a bar that serves you free pizza with every beer you order. Yes, FREE pizza with every drink. This bar also boasts some great bar games including skee ball and a trivia night on Wednesdays, where prize drinks may motivate you to study up on your random trivia knowledge before hitting the bar.

This bar draws a wide variety of clientele from students to neighborhood bohemians to Village Voice staffers coming in for an after-work drink. Despite the Asian themed paper streaming from the ceiling, this bar has a quaint pubby atmosphere. According to Lindsey, Cooper 35 is “pretty weird since it is an ‘Asian’ food place, but they serve you chips and salsa once you sit down. But NOBODY CARES WHEN THE DRINKS ARE $4.” That being said, the drinks are cheap and while the chips and salsa paired with Asian themed décor may be off putting, as stated, the drinks are cheap–something not always easy to come by in NYC.

This is a cute little restaurant serves up great pizzas and has an extensive wine list. Despite the menu full of pizza and salads, this bar/restaurant has a Venezuelan-inspired edge and great, cozy décor. The brick walks and marble counter tops make for a warm, festive atmosphere. This is a great place to have a wine bar experience without maxing out your credit card.

If you do want a slammin’ $12 cocktail, you should get a “papi chulo” at El Centro in Hell’s Kitchen. It’s an absolutely amazing margarita, which as Lindsey says, “it damn well should be at that price. It’s an extra dollar if you want a flavor. But hey, I’m cheap and still get them, they’re THAT good.” So apparently this $12 cocktail is worth the big sticker price. If you’ve got the munchies, Lindsey also recommends the Oaxacan burrito here.

Apparently Miss Brown and New York Magazine have aligned once again on the hunt for great bars with great prices, as the magazine also gives this bar a “Critic’s Pick.” This West Village hangout is the perfect place to get a cheap beer and play one of the many bar games available. They have everything you could dream of game-wise here—ping pong, shuffle board, pool, chess, etc. Plus, New York Magazine describes this basement bar as having a “the ratty psychedelic feel of a saltwater aquarium circa 1976,” which sounds pretty cool to me. Lindsey says this is the perfect place for a big group and has a great, chill atmosphere.

Ok, so there you have it. 5 great bars to try the next time you are in New York that won’t break the bank. Keep on the lookout for a cute blond girl named Lindsey Brown when you’re out and about and personally thank her (and buy her a drink) for offering up her advice on these NYC hotspots.